A pier surrounded by the ever changing sea is the perfect setting for Steven Berkoff’s turbulent writing as the intimate Studio 2, Trafalgar Studios, hosts a highly anticipated double bill of his work this month.  A solitary bench is expertly brought to life by Shaun Dooley (Man) and Emily Bruni (Woman) as their expression of Berkoff’s provocative prose immediately captivates the audience.

New to Berkoff’s style, we were somewhat unprepared for the overwhelming stream of chaotic metaphors that are prevalent throughout. Conversational dialogue and intimate thoughts are often interchanging, as in life, yet sometimes the difficulty to distinguish between the two led to moments of confusion. This led to a lack of understanding of what exactly was being said.

However, director Nigel Harman’s decision to incorporate a considerable amount of animation in ‘Lunch’ was a wise one and the visual representation of the characters’ deepest, darkest thoughts ultimately enhances the audiences understanding of the piece. The movement used is extremely physical, especially from Dooley’s committed portrayal of ‘Man’, as true human desire is unveiled.

The second play, ‘The Bow Of Ulysses’, is almost a complete juxtaposition as the same characters sit lifeless, twenty years later, exchanging monologues filled with despair and extreme levels of hatred for one another. Choosing to perform them consecutively worked perfectly as both offer a level of insight to the other, providing a more complete appreciation for Berkoff’s two complex personalities.

Although both pieces offer an element of humour, audience laughter is mostly in response to the shocking sentiments being shared on stage. It’s  a theatrical experience designed to make you feel uncomfortable at times, to question the darkest depths of human nature and the worst of relationships. 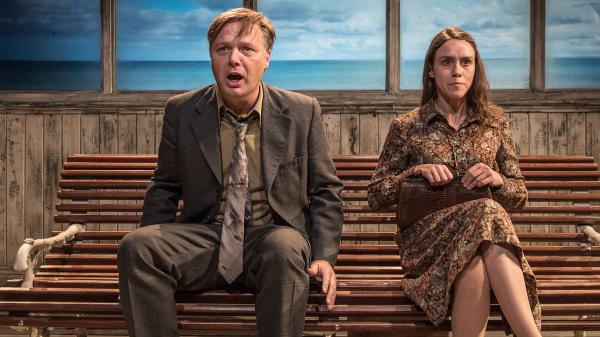 Steven Berkoff’s ‘Lunch’ and ‘The Bow Of Ulysses’, directed by Nigel Harman, are playing at The Trafalgar Studios until November 5th http://www.atgtickets.com/shows/lunch-and-the-bow-of-ulysses/trafalgar-studios/