The Hotel Cerise had its world premiere yesterday evening at the Theatre Royal Stratford East. Writer and critic, Bonnie Greer has taken Chekhov’s timeless play, The Cherry Orchard and transported it to America in the weeks leading up to 2016 election (in other words, now) highlighting the class and race divide that the nation is currently facing.

Instead of the Ranevskaya Estate, Greer creates The Hotel Cerise (‘cerise’ meaning cherry in French), once a luxury summer resort for elite African-Africans in Michigan but in present day a bankrupted and empty building, filled only with the occupants’ memories of the good old days.

Although the setting is different, Chekhov’s plot is pretty much intact however it’s certainly quite topical. Maybe too topical. The events that are talked about on stage are happening at this very moment. How can the audience or anyone have any real perspective on these events? So much is made of Barack Obama’s presidency – wouldn’t it have been better to set this play back in 2008, when he was running against John McCain and make that the focus of African-Americans’ hopes and aspirations? Just a thought.

The direction by Femi Elufowoju Jr is good at establishing a group of people desperately trying to find their own identity and meaning as the unknown approaches. The twelve member ensemble cast is full of raw talent with Ellen Thomas giving a particularly powerful and heartbreaking performance as Miss Anita. 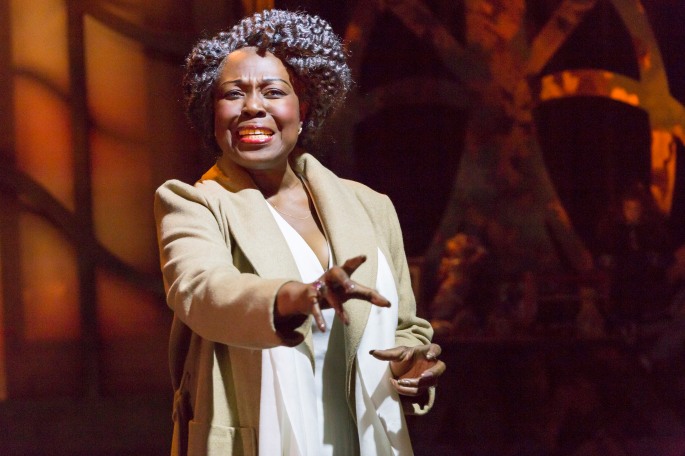 Although an interesting and thought provoking production, it is not entirely successful at what it sets out to achieve.

You can runs at the Theatre Royal Stratford until November 12th. You can buy tickets for the show here: http://www.stratfordeast.com/whats-on/all-shows/the-hotel-cerise/#schedules