This week the The Comedy About A Bank Robbery celebrated it’s second birthday in the heart of the West End, the Criterion Theatre and we were lucky enough to be invited.  An evening that promises to fill you with endless laughs, perfectly timed jokes and a stellar cast, it’s no wonder the Mischief Theatre Company continues to triumph with every show they produce.

The premise of the show is simple – a priceless diamond is entrusted into the hands of the Minneapolis city bank and everyone wants to get their hands on it. Through a couple of love triangles into the mix and that’s the show in a nutshell. 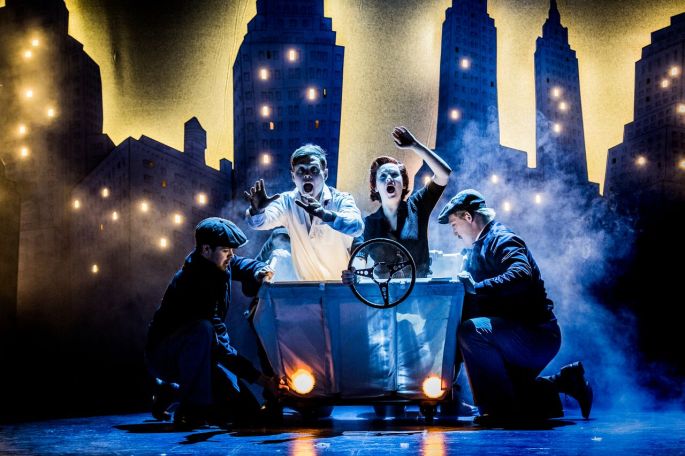 The cast are made up of Samson Ajewole as Neil Cooper, Jack Baldwin as Officer Randel Shuck, Leonard Cook as Robin Freeboys, Sam Fogell as Sam Monaghan, Matt Hunt as Mitch Ruscitti, Chris Leask as everyone else, Holly Sumpton as Caprice Freeboys, Peter McGovern as Warren Slax and Jenna Augen as Ruth Monaghan. What makes Mark Bell’s production special is the array of wonderfully different characters who always land themselves into sticky situations adding great comedic value each time. Every character brings a different element into the show and the balance works really well.
Standout performances on the evening were Peter McGovern as 60 year old intern Warren Slax. His attention to detail and incredibly timed comedic points, worked wonderfully in the show. His character is the guy you’re rooting for throughout the piece and Peter plays this very well. Jenna Augen as Ruth, the banks secretary. What’s great about her role is the fact that she seems like the innocent, trusting type but without giving too much away, her character does a whole 360 by the end of the play. Something that the audience don’t expect but it makes for a good plot ending.
This acting troupe are the real deal and worth keeping an eye on as they continue to grow this franchise. With simple but effective sets and great lighting design, every element of this play just works. If you’re looking for a fun night out at the theatre – this is the show for you.
The show has now extended until April 2019.
You can book tickets here: http://www.thecomedyaboutabankrobbery.com/