Last night, Six-time Tony award winning Audra McDonald opened her four night residency at the Leicester Square Theatre. Although she may not be a big name in the UK, she is certainly a Broadway sensation and it’s wonderful to have her back in London. Hosted by pianist and long-term friend Seth Rudetsky and featuring special guest Will Swenson, it was an evening that fulfilled all of our stagey needs.

After performing at last weekends Oliver Awards, McDonald also had a show at the Donmar Warehouse back in 2000. We’d call these shows warm-ups for her West End acting debut as Billie Holiday in Lady Day at Emerson’s Bar and Grill, opening at the Wyndham’s in June. It’s great to be able to see her as her charming self before she jumps into the role of such an iconic singer this summer. 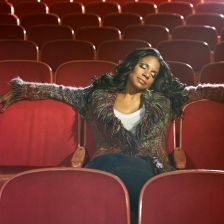 The show had a rather intimate feel and was a mix of show tunes lead by chatter as Rudetsky hosted a Q&A in between each song. It was evident that the pair had been friends for quite some time as they bounced off each others energy whilst reminiscing on their past. They told the story of her final exam at Juilliard in which he accompanied her on the piano, a moment in which she thought she was going to epically fail. It was wonderful to see the ease of their conversation that was filled with fun, lighthearted humour and sassiness. Whilst continuing to include the audience it felt like you were in a room filled with your closest friends.

McDonald told stories of her journey to stardom through her college experiences, her first job working in Dinner Theatre’s and her celebrity encounters along the way, including what it was like to work with Puff Daddy and the time Liza Minnelli made her late for the Tony’s. She also told of the time she passed out at a concert to which Julie Andrews came to visit her in hospital to make sure she was okay. It was all very showbiz and we loved it!

Her setlist included songs such as “Maybe This Time”, “I Could Have Danced All Night” and a duet with husband Will, “You Don’t Bring Me Flowers”. Showcasing her trained operatic voice, McDonald filled the room with her incredible vocals, her warmness and over-powering charm. It’s understandable that the crowd were eating out of the palm of her hand and were fixated on her performance.

Audra, is not only a wonderful leading lady, she’s a parent and it’s clear to see that she balances show-business with her personal life very well. She’s a star and after last night, we can absolutely see why.

You can catch Audra at the Leicester Square Theatre until Saturday 15th April:
https://leicestersquaretheatre.ticketsolve.com/shows/873569219