Music, lyrics and book by Richard O’Brien, The Rocky Horror Show is back and better than ever with a UK tour. The musical tells the story of a young newly engaged couple getting caught in a storm resulting in them coming to the home of a mad scientist transvestite. They come to discover that his latest project is a Frankenstien-style monster who is fully grown, physically perfect and goes by the name of Rocky Horror. This show oozes crazy and is certainly very unique but nevertheless remains as iconic and popular as ever.

I have never felt so overdressed to see a show at the Theatre prior to seeing The Rocky Horror Show. Looking around the audience as they take their seats, you will see crazy Rocky themed outfits which includes men dressing in suspenders and feather boas. It’s safe to say that this show has its fair share of die hard fans.

It’s usual theatre etiquette to remain silent during any show but with this production, you will hear the best audience participation I have ever seen. Norman Pace as the Narrator was one of the main highlights of the show. Whilst other cast members managed to keep a straight face during humorous moments, he couldn’t help but laugh with some of the obscene things the audience were screaming out. Pace managed to maintain the attention of the crowd and was always able to bring them back into the show when things went a little off track. 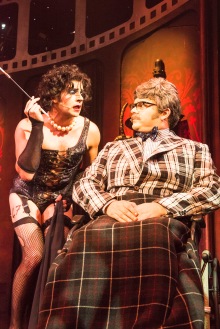 Previously seeing Liam Tamne as the romantic Raoul in Phantom to a now “Sweet Transvestite” was rather an entertaining transformation for me. His performance as Frank-N-Furter really shone through. Sophie Linder-Lee and Kay Murphy made their roles of Columbia and Magenta so amazing which meant I was fixated whenever they were on stage. The energy from them both was very enjoyable to watch and you could see the passion they had for both their roles and the show.

I found Janet and Brad as a couple very amusing. Laura Ingram’s portrayal of Janet was a big highlight of the show for me. Although it was a shame that the orchestra was rather overpowering whenever she was singing therefore at times it was hard to hear her.

Ending with the classic and timeless song, The Time Wrap was a perfect ending to the show. With the audience highly participating and singing along with the cast was a great moment to be apart of.

The show is bizarre but in a highly enjoyable mad way. I’d see this show again in a heartbeat. Let’s do the Time Wrap again and go right back to the beginning.

You can check out the tour as it travels throughout the UK http://rockyhorror.co.uk/